Welcome to our Homestead

A quiet, peaceful sanctuary from the chaos of everyday living in a world on the brink of insanity! A place where we prepare for the worst, but hope for the best!

Header contains picture taken at Rocky Oak Homestead™
Blog background may not show as intended on on hand held devices.

Posted by The Homestead Lady at 6:57 PM No comments:

These arrived this morning! It’s been so long since I’ve had chicks...I’m so excited. I miss all the homestead stuff we used to do, I’m hopeful to get back to it over these next few months. Lord knows with the way things are the more self sufficient we can be the better! 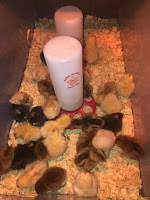 Posted by The Homestead Lady at 11:18 AM No comments:

The decision has been made

So today I decided to leave my personal Facebook page for good! I’ve been mulling it over for awhile but finally I reached the tipping point. There’s a time  you come to realize that no matter how much you respect or like someone, no matter how much you try and ignore the negativity, no matter how kind you are, people will still be mean.
Being insinuated you are stupid because you live life differently, choose differently and have a different opinion is flat out wrong! Just because something doesn’t line up with your way of thinking doesn’t mean the opposing person is “stupid”.
For awhile now I’ve felt like I was in middle/high school with a group of immature bullies that didn’t have “words” to express themselves but rather wrote on the bathroom wall or in the case of Facebook posted negative memes! Posting memes calling people stupid is...well stupid! The definition of stupid is the “lack of ability to understand” seems we have that a lot on Facebook! Or possibly it’s that people simply choose not to understand another’s perspective on Facebook because they can say nasty things with no consequence!
I can almost 100% assure you very few people would call another person stupid if they were having a conversation face or face. There are the handful of verbal abusers that would of course.
Facebook has made the mental and emotional abuse of others common place. It’s extremely sad and concerning that human beings hide behind technology to abuse another human being. It’s almost like they forget there really is a real, living, breathing human on the other side of that screen. The abuser can say all the mean things they want, then simply shut it off and move on while the person on the other end is literally broken! To add fuel to the fire the one broken gets told their(the keyboard warrior) just an ass move on, don’t let it get to you, they are like that to everyone! Can we not see the harm in that as well! When did we quit having compassion for a hurting person?
Then we have the passive/aggressive people that after you tell them you don’t like something people do, they begin doing it all the time!
Facebook is literally breeding a society of  abusers that honestly see nothing wrong with their behavior! Children are growing up seeing this warped behavior and bullying and thinking this is how we as a supposed civilized society behave! That’s terrifying!
With all that said, I’m done there! That behavior will not be tolerated on my blog. I liken my blog to my home, my personal space and as such if you can’t be nice and respectful...don’t visit! If you disagree with something I say fine! Do it respectfully or quietly find the door. I honestly do hope you enjoy your visit here. Please comment as time allows, it’s always nice knowing people are visiting!
Until next time...
Posted by The Homestead Lady at 9:04 AM No comments:

People I am Grateful For!

Prepare for the worst & hope for the best!