Welcome to our Homestead

A quiet, peaceful sanctuary from the chaos of everyday living in a world on the brink of insanity! A place where we prepare for the worst, but hope for the best!

Header contains picture taken at Rocky Oak Homestead™
Blog background may not show as intended on on hand held devices.

What are we becoming?

When I read the story of the woman raped on a subway as the passengers recorded the incident I was sickened...I really have no words to adequately describe the feeling that overwhelmed me.
What has happened to us as human beings? Have we become so self absorbed that another’s suffering is oblivious on us? Have we just decided women are objects to be used and tossed aside? Have we truly lost the ability to feel compassion for our fellow human being?
We pride ourselves in how intelligent we are as a species yet our behavior says to the contrary! We cannot call ourselves intelligent and continue to abuse, bully and lack compassion for people suffering.
Bullying is out of control amongst children and adults in this country. We see it in our schools and on social media. Children bully others at school and we must ask where did they learn such disgusting behavior...a quick look at the parents social media will quickly yield the answer....parents post memes making fun of others, our leaders make fun of others so I guess in some minds that makes it acceptable!
We seeing bullying from our pulpits in churches to our presidential platform...it’s not just in a certain partisan group, it’s across the board. We see people stating opinions on Facebook and then bullying those that disagree...we see social media gaslighting....posters post something just to bait an argument so they can feel superior.....we see adult parents bullying and assaulting their child’s teachers over wearing a mask, restaurant workers being abused and assaulted for doing their job...and then we ask why this woman was raped in public...
We need to ALL sit down and re-examine what we are teaching the younger generation...we ALL need to look in the mirror and ask ourselves the hard questions...are YOU part of the problem! Am I? If we admit it, if we truly are part of the issue we must change it within ourselves....I see this trend of  using the excuse I’m trying to wake people up so that’s  why I say the things I say...NO! You are a bully that can’t accept people have a different outlook on the situation. People lie to stir the pot. Or tell half truths.
We all have the right to our own opinions, viewpoints and way of living our life...as long as it’s within the scope of the law why do you care?  Let it be!
When we see a woman being assaulted, violated, and humiliated and you record it...YOU ARE THE PROBLEM!
Multiple people were there, they easily could’ve taken the assailant down and helped the woman long before the actual rape while he was harassing her!
Have we become so robotic, so unfeeling that we live our lives just waiting with phone in hand to see what brutality we can capture and share on social media? For what...likes? To pander to our egos? To somehow give a thrill or a rush? What if that was your sister, mom, aunt, grandma? Would you want that all over hell and half acre for strangers to see and watch?
What the hell has happened to us? It’s scary to think we have become so indifferent to each other that ruining someone’s reputation or life is ok because it’s just social media. We need to remember behind that phone screen is a real human being. When those people recorded that rape did they forget that woman was a human being? When you bully online do you forget the person you are bullying is a real person?
We are living in a world I really thought I’d never see..it’s terrifying honestly...I literally ask myself daily...what are we becoming as a society.
What.are.we.becoming? Sigh...
Until next time...
THL
Posted by The Homestead Lady at 9:34 AM 1 comment:

During my time on Facebook farm man along with the help of our neighbor and friend built a hoop house. It is 7 ft by 24. We have been working on getting cool/cold weather crops planted. We are anxious to see what we can grow in our climate. So far we have lettuce, radishes, parisienne carrots, Brussels sprouts, cabbage and cauliflower...I’m waiting on a seed order to plant spinach. We feel with the direction things are going that this just made sense. Below is a video of what we’ve done. Sorry, it’s long...lol

Posted by The Homestead Lady at 4:32 PM No comments:

Ok, so I was very excited about moving my blog to Facebook...it was short lived! I will be moving back over here. The censoring on Facebook is absolutely insane. When one can’t post an uplifting quote without it being against community standards that’s enough for me. It’s time to wake up! The things going on in our country and world are not ok! The control is becoming crazy! Time to wake up!!
Until Next Time... The Homestead Lady
Posted by The Homestead Lady at 3:29 PM No comments:

It’s a cool start to the day...I can definitely feel fall in the air. I sit here, coffee in hand, in the quiet and wonder what comes next in our world. The past 19/20 months has brought about many challenges for us all. Challenges on many fronts, not just political. The challenges have brought out the best and worst and people. I worry about what our future holds....what will really happen to us all. I sometimes feel all the divide and arguing is taking away from the bigger picture of what really going on...Honestly, I know it is...life is seemingly going on for most people...some however are watching, listening, pondering...trying to make sense of it all...some are staying home, not out of fear but just laying low and paying attention...being mindful of what sources they garner their information...not getting sucked in by this side or that side just simply reading and watching...some have tried to tell others to be watchful without much luck...most simply aren’t ready to hear it...some know it, but seem to be in a huge state of denial or normalcy bias....not much one can do to talk to those types...some just keep to themselves doing what they need to do to stay safe...whatever side of the divide your on...just be ready...prepare now...don’t think you can depend on others in the crisis...now is the time to ready your family....I won’t get into what I think is coming...maybe I will at some point...suffice to say you just need to prepare!

Posted by The Homestead Lady at 10:01 AM No comments:

Back to the basics

I sit outside most every morning after the chores are done and enjoy my coffee....and think....I think about the state of our country and our world a lot....I think about how we are so connected to our phones, iPads, computers etc...I’m not so different...I blog from my phone!....I’ve pondered lately what would happen if we all suddenly lost our technology....maybe through a grid down situation, or internet crash...any manner of things that could take away our “life line”....I sit out side this morning in the quiet and just looked around...I mean really looked around...paying attention to the sounds, the colors, the smells, the feeling of the sun on my skin, the blue sky....I made it a point to do this....I left my phone in the house this morning....I wanted NO distractions...it was nice....I realized all the things we miss every single day because we are so tied to technology...I was really eye opening to me...people would go crazy in a short period of time these days if we lost phone service, internet, power...I’ve felt that way before when our phone service went down...it really is a good idea to have backup communication for at least your family...I think it’s really time to wean ourselves from our dependence on so much technology...I believe it’s going to be our undoing...lay your phones, iPads, computers aside...go outside....listen...breathe...relax....learn to do this regularly...unplug...things aren’t going to get better anytime soon...learn to be ok without your phone 24/7...figure out a way to communicate with your family if you have no cell phone...let’s get back to the basics...our lives may depend on it! Took this video this morning after my quiet time....total silence except for sounds of nature...I loved it!

Posted by The Homestead Lady at 10:58 AM No comments: 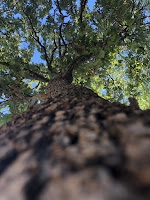 Mornings are getting a bit cooler and the days getting shorter here on the homestead. Preparations for fall are underway. Barns/sheds will be winterized, hay purchased, extra feed put up. Heat lights tested, replaced and ready to go in anticipation of a long, hard cold winter here.

We too make sure we have things we need so we need not venture out in the ice/snow, cold & covid...lol.

The leaves have begun their descent to the ground, lightly dancing in the gentle breeze as they fall...their season has come to an end of providing shade for us, and will now act as a ground cover to help keep delicate plants warm during the cold winter months...

We will soon be chased inside, tucked away quietly enjoying the slumber and slowness that winter seems to bring to the homestead. We will enjoy the winter scents of apple and pumpkin as I bake to bring a bit of comfort in those cold winter days.

People I am Grateful For!

Prepare for the worst & hope for the best!